“In one of our concert grand pianos, 243 taut strings exert a pull of 40,000 pounds on an iron frame. It is proof that out of great tension may come great harmony.” Theodore E. Steinway

I love to read and write prose.  My posts here average about 1500 words, which don’t seem like a lot considering I just finished reading Dickens’ Hard Times (one of his shorter novels at only 448 pages).  I recommend it highly, as the man wrote beautiful sentences  that created interesting characters and vividly depicted the lives of several classes of people in 19th century England.  If that is not a triple crown performance, it is at least the equivalent of hitting for the cycle.  That’s exactly what I strive to accomplish when I write about 21st century baseball.

But I don’t write this with the expectation that you will be shopping at amazon.com for classic literature, or even reading all of my posts.  Rather, I use this as a preface to introduce this particular post as a series of bullet-points, not well-crafted prose. (I use Breakpoint as an homage to an admired commentator, and baseball fan, Eric Metaxas, http://www.breakpoint.org/equip/bibliotheca/19622-review-of-metaxas-qseven-men-and-the-secret-of-their-greatness).  Despite my own personal tastes, I am aware that most 21st century readers, and certainly readers of sporting news, prefer shorter pieces.  The condensing that began with Reader’s Digest was followed by People Magazine and was then perfected by David Letterman and has now been adopted by Bleacher Report as the sports standard.  Give the readers a list  (in pictures, preferably) and as little commentary as possible (except, of course, on talk radio and ESPN, where there is way too much commentary).  Ok, I will bow to the written genre’s requirement of a list, but with only  a few picture or external links and with the preservation of my right to extend the commentary as long as I need to for melodramatic effect, even if it is presented in bullet-point fashion. Here you have them,

My 10 most burning questions from the first-half of MLB’s 2013 season:

10.  How did NYY win 51 games with THAT line-up?  If they stay on this pace and finish with almost 90 wins, Girardi and Cashman should win awards even if the team doesn’t make the playoffs.  Let’s all hope that A-Rod does not make it back to the field to distract everyone from the really fine job these guys have done without him.  Addition by subtraction has always been the mathematical principle that makes the most sense in sports.

9.    Considering addition and subtraction, is John Farrell really that good as a manager or was Bobby Valentine really that bad?  The Red Sox have the most wins in MLB (58) and have been consistently good all year, just months after having been almost historically bad (only 69 wins all last year).  I still maintain that it was the fault of the players that now wear Dodger Blue more than it was Valentine’s, but it now appears that performance was lacking both on the field and in the dugout.  Not so far this year.

8.    Speaking of Dodger Blue, who could have guessed that the most important move LAD made last season was signing a Cuban defector?  The entire team is showing signs of climbing out of the pits, but does anyone think this would have happened without the emergence of Yasiel Puig?  Don Mattingly should be really thankful.  Even if Puig doesn’t get them to the play-offs, he probably saved Mattingly’s job for one more year – something Kemp, Kershaw, et al., could not do.

7.    And while we are in SoCal, can anyone remember a time when three teams in the same city (sorry Anaheim,  “Los Angeles” appears first in the Angels’ team name) started their respective seasons with so much hype and stumbled so badly?  The Dodgers, Angels and Lakers all made major roster additions and none has succeeded.  Of these 3, LAA is the biggest disappointment for the second year in a row.  How can that line-up be 5 games under .500 and 11 games out in their own division?  The answer is obvious, actually.  LAA is 6th in runs scored but 27th in ERA.  I said before the season started that I was sure LAA would rather have kept Greinke than sign Hamilton.  Good pitching still beats good hitting.  But even Greinke’s and Kershaw’s pitching has propelled LAD to only 3 more wins than LAA.  And now Dwight Howard has chosen the Rockets over the Lakers!  Just what is going on in LA?

6.   But back to speaking of good pitching, can you believe who has the best staff ERA in MLB?  PIT!  That’s right, the franchise with 20 consecutive losing seasons.   The Bucs are 19 games over .500 with 69 games to go.  That means they only need 26 more wins from that stellar pitching staff to break the longest seasonal losing streak in the history of all sports.  We thought this would happen last year, but a 2d half collapse ensued.  For the sake of PIT, and baseball’s best uniforms and most beautiful park (in my humble opinion – SFO is a close 2d), let’s all cheer for the Pirates.

5.   Good pitching is critical, for sure, but when are people going to learn that pitchers are needed for the entire season and not just one game?  I’m down on these guys who throw no-hitters and then get bombed in the next 10 starts, or the rest of their careers.  Homer Bailey threw MLB’s last no-hitter in 2012 and the first in 2103, while sporting a cumulative ERA of over 4.0 in between.  Tim Lincecum is still in danger of being sent to the bullpen even though he found his former magic for a 147 pitch no-hitter. We’ll see if that cooks his career the way it did for Johan Santana (if the Freak’s career wasn’t already cooked).  Are the Mets happy now that they can finally say they have a franchise no-hitter? Or would they prefer to see Santana still pitching every 5th day?   If I was a manager, I would tell these guys this is a team game and we have 162 to play this year.  “Forget your individual accomplishments and get in the dugout!”

4.  Speaking of handling of pitchers, was shutting down Stephen Strasburg for the post-season last year a good idea?  In hindsight, it appears to have back-fired on WAS.  He’s not pitching that well and the team may not even get back to the post-season unless they catch fire in the second-half.  The team that appeared to have no holes at the start of the season has had no spark for the season so far.   One game over .500 and out of any post-season spot is not what many expected.  Bryce Harper’s second place finish in the Home Run Derby last night might be telling – some talent, no big results.

3.  Speaking of big results, what if after going over 45 years without a Triple Crown Winner in MLB, we have one in consecutive seasons? And what if he’s the same guy?  Wouldn’t that be one of the sport’s all-time greatest achievements?  That’s 3 questions, I know, but they all refer to Miguel Cabrera, who has already completed a superlative season, .365, 30 homers, 95 RBI, and it’s just the All-Star break.  He trails the new Superman, Chris Davis, in HR’s by 7, but that’s not insurmountable.  I usually put the team over the individual, see point 5 above, but Cabrera’s performance is truly amazing.  And perhaps, just perhaps, he will be able to carry DET over the hump this year.  I still can see him frozen at the plate that rainy October night in SF when he took a called strike 3 from Sergio Romo and made the last out in the 2012 World Series.  That tends to dampen one’s memory of a historic season…..

2.  And speaking of historic seasons and dampened memories, can Chris Davis actually erase the taint of Barry Bonds, Mark McGuire and Sammy Sosa and establish a new, de facto, MLB single season HR record? Davis is on a pace for 62 home runs.  Assuming he is not doping, (http://articles.baltimoresun.com/2013-07-11/sports/bal-chris-davis-denies-ever-using-steroids-or-performance-enhancing-drugs-20130711_1_steroids-orioles-tests ,  wouldn’t it be interesting to see fans get caught up in a legitimate effort to overtake Maris’ previous record of 61?   And could there be a new asterisk in the MLB record book marking Davis’ number and stating that “most fans believe this to be the real home run record”?  Wouldn’t that provide the perfect cover for MLB to issue new punishments for the Biogenesis crowd (including lifetime bans) and state once and for all that MLB is coming clean?  I watched the movie Eight Men Out again last week, about the Chicago Black Sox.  It is compelling in it’s message that baseball must be purged of any doubt about the players’ performances.  Isn’t that what we all want, to believe in baseball again without reservation?  As Branch Rickey said to Jackie Robinson, “you let me love baseball again.”  Davis’ quest is not commensurate with that of Jack Robinson’s, but his could be a very important one in the modern history of the game we love.

1.  And speaking of love, my most burning question from the first half of the 2013 season is whether that most romantic of all baseball fans, Billy Beane, can finally fulfill his life’s passion of winning the last game of the World Series?  (I also watched Moneyball again last week. I love it when Brad Pitt says “it’s hard not to be romantic about baseball.”)  The A’s are a solid team and do not have the question marks of last year’s surprise success.  They have been streaky so far but have the second best record in the AL and are in 1st place in the West.  As I said in earlier posts, I am a Rangers fan again and would like to see them win the Series, but I also would be pleased to see a ALCS between OAk and TEX, or, perhaps even better, the rejuvenated Red Sox.  If OAK won, John Henry might still try to hire Billy Beane.

There is no Hollywood-scripted World Series opponent for OAK that I can think of, so why not have them play a team from Hollywood, LAD?  The team with the $220 million payroll from the gorgeous Chavez Ravine pitted against the team from the sewage-filled O.co Coliseum with a $68 million payroll.  Magic Johnson’s electric smile juxtaposed against Billy Beane’s winsome smirk.  The memories of Rollie Fingers, Dennis Eckersley, Joe Rudi and Gene Tenace, against Sandy Koufax, Don Drysdale, Steve Garvey and Bill Russell, now erased by Yoenis Cespedes (HR Derby champ) against Yasiel Puig (NL Rookie of the Year and MVP).  It would be the complete reverse of the 1988 Series when OAK was the favorite and the underdog Dodgers pulled off a miracle upset, thanks largely to Kirk Gibson’s impersonation of Roy Hobbs.  http://www.bing.com/videos/search?q=kurt+gibson+home+run&mid=2F67D9856FF699695EC12F67D9856FF699695EC1&view=detail&FORM=VIRE1

Perhaps there is a Hollywood script here, after all:  Major League Baseball accomplishes in one October Series what presidents and the CIA and Communist dictators haven’t been able to do in over 50 years:  restore relations between the USA and Cuba.

It would be very hard indeed not to feel romantic about that.  I’m pulling for you, Billy. 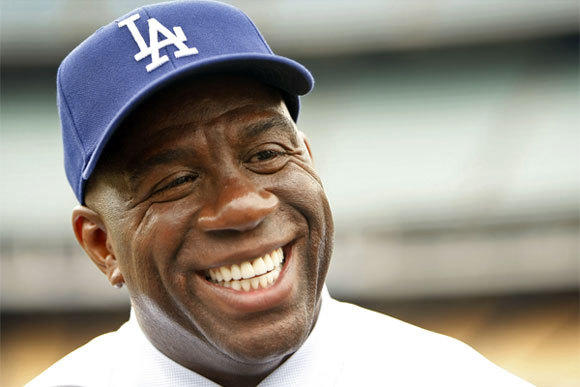