“I never feel more at home than at a ballgame.”

In just a few hours the calendar will read like an optometrist’s chart, and we will all see 2020.  Unfortunately, we still won’t be able to see perfectly, because even 20/20 performance does not mean that one has perfect vision, only normal eyesight.  The American Optometric Association website explains it this way:

20/20 vision is a term used to express normal visual acuity (the clarity or sharpness of vision) measured at a distance of 20 feet.  If you have 20/20 vision, you can see clearly at 20 feet what should normally be seen at that distance.

So, 20/20 vision is a comparative test of your eyesight relative to the eyesight of an average person.  I found that interesting because it essentially describes what we tried to measure when B.A.B.E.S. was founded in 2008 – testing our predictive acuity against that of professional sports commentators or prognosticators.  https://babesbaseball.wordpress.com/309-2/.    The fact that we were measuring ourselves against professionals rather than the “normal” fan does not change my opinion.  Rather I believe it clarifies what is normal in the field of baseball forecasting – that there are no true experts, or that anyone can be an expert.  In that sense, everyone has 20/20 vision, or no one does.  Get the picture?

With that clear introduction, I begin this New Year’s 2020 post with these non-professional, visually imperfect Top 10 predictions for the coming MLB year, made with expert acuity or, I hope, acuity comparable to that of a normal fellow Society member:

Clearly, my vision is not 20/20 when it comes to the Yankees.  I ascribe to them evil intent and unfair success for their historic practice of outspending all other teams and essentially buying championships.  I explained that view in detail in my 2012 post.  While the 2020 Pinstripes version will be largely homegrown, it will still have purchased, as the highest bidder, the last piece of the title puzzle in Gerritt Cole.  Of course, they took Cole from the Astros, my favorite team, which you may have noticed was the other main focus of the ten points above beside the Yankees.  However, is Cashman’s move to sign Cole for $324 million truly different from what the Astros did in 2017 when they acquired Justin Verlander at the trade deadline?  Perhaps there is a qualitative difference, in that a trade requires a different kind of negotiation than does a free-agent signing, but money is still definitely a factor.  And even if Jeff Luhnow showed more skill in trading for Verlander in 2017 (and then for Zack Greinke in 2019), how will that success be tainted by the sign-stealing scandal?  Can it be possible that he did not know about it, if it existed?  Is it possible that the Astros are MLB’s version of the New England Patriots, only with five fewer championships?  How do I admit that and still justify any criticism of the Yankee organization?

So I enter the new year, and the new decade, with blurred vision.  My favorite team has become a turn-around story for the MLB ages, having lost 100 games three consecutive seasons and then won 100 games in three consecutive seasons, both within the same decade!  Will that type of rags to riches story ever occur again?  However, the Astros won only one championship and that is now under scrutiny for the unsportsmanlike way in which it may have been achieved. (Yu Darvish surely wants to know).  On the other hand, during this period of rapid improvement by the Astros, they have been recognized for innovative use of analytics not just in defensive shift strategy but in individual performance.  Charlie Morton and Gerritt Cole both resurrected their careers under pitching coach Brent Strom’s guidance.  They both obtained lucrative free-agent offers after two years in Houston.  Morton may have only gotten $45 million compared to Cole’s $324 million, but I assure you he is not complaining.   He was practically out of baseball when the Astros offered him a two year $14 million deal.

No one has challenged the skill with which the Astros analytics department tutors individual players to get the most out of their skills.  Yet the Commissioner of Baseball, and many media and fan representatives, have asserted that the fundamental shift in how the game is played (literally, with most position players aligned other than as traditionally placed) is bad for the game.  Defensive alignment has taken away many hits, as has the batter’s swing path, now seeking to obtain a launch angle rather than just make good contact.  Further, the size and strength of pitchers and the proliferation of pitching changes, all have driven the batting averages down and the time of the game up. So have the Astros improved the game or ruined it, even if they have not violated the rules of good sportsmanship?  The picture is simply not clear.

The new year should provide some clarity on both the Astros’ degree of sportsmanship and permitted innovation.  Commissioner Rob Manfred will be instrumental in clarifying both, first with the outcome of the investigation of the sign-stealing allegations and secondly with his on-going effort to fight the impact of analytics – limiting defensive shifts, limiting pitching changes and perhaps letting the ball be juiced, or at least the seams be raised.  As I contemplate the potential outcomes, I admit to being slightly unsure about the coming year and decade.  I just can’t get a clear picture of where my team stands, or where the game is going.  Perhaps I will see better in 2021, but what if the Yankees are World Champions?  I’m keeping my eyes closed. 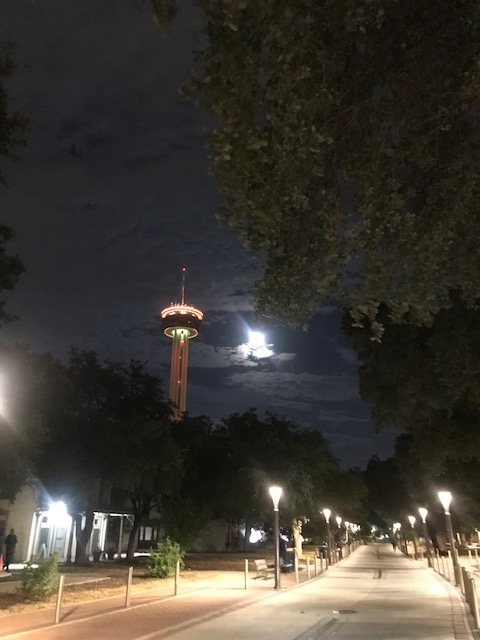 (Moonlight and darkness over the Tower of the Americas, San Antonio, TX, 2019)